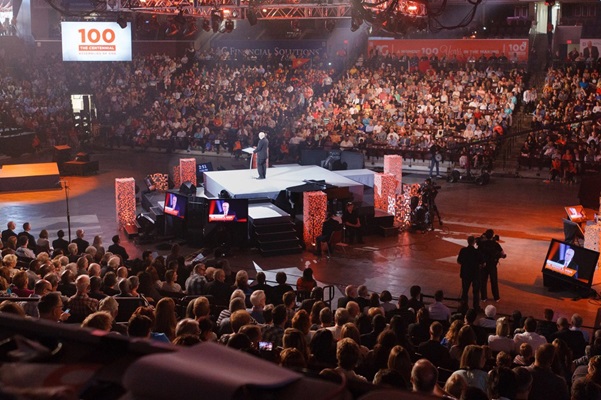 Thousands of people from 120 nations descended on Springfield, Missouri, USA, in August 2014 to celebrate the 7th Triennial World Congress and USA 100th anniversary of the Assemblies of God. Throughout the event, multiple speakers, both foreign and domestic, congratulated the AG for mushrooming to more than 67.5 million members and 366,105 churches in a century. The vast majority of the growth has occurred during the past 50 years. By 1964, the AG worldwide had just over 2.2 million adherents attending 25,467 churches.

Various leaders expressed gratitude to God for allowing the AG to thrive in their cities or nations. The roster of speakers came from every corner of the globe.

You may view or download the World Congress/USA Centennial sessions at www.100.ag.org. (They are best viewed through Firefox, Chrome or Internet Explorer 11.) Click on Watch Now. Click on Watch Archives.

2021
by the General Council of the Assemblies of God